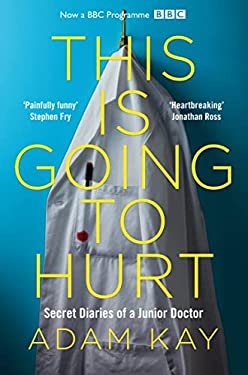 This Is Going to Hurt is the diaries of junior doctor Adam Kay in the years before he leaves medicine, disillusioned by the gruelling hours, bureaucracy and lack of support. The diary entries document the funny and heart-wrenching anecdotes from his medical career, showcasing the best and worst of humanity along the way.

The book can be thought-provoking and emotionally raw in an entirely un-self-interested way. It taught me so much about the training process and daily life for medical staff, as well as the demands placed on them.

However, the reason why Adam Kay is able to convey the seriousness of the issues facing the NHS so well is, paradoxically, his unique brand of humour. He now works in comedy and it’s easy to see why! So without further ado, here are the funniest moments of This Is Going to Hurt that had me laughing out loud in public places…

*Minor spoilers ahead, but don’t worry – the book contains plenty of other laughs!*

1.In which an obstetrician airs his opinion on home births:

‘Unfortunately, today’s clinic is running massively late, and I’ve got a dinner date, so I don’t have time for all this. Instead, I give the abbreviated version: “Home delivery is for pizzas.”’

2. In which an accidental typo turns out for the best:

‘…flicking through the notes, I see a clinic letter I wrote to her GP back in March. I spot a horrifying typo in my sign-off, thanks to a missing “hesitate to”. If you have any questions whatsoever, please do not contact me. It worked, though. Not a peep.’

3. In which myths are debunked:

4. In which another good deed – for an elderly patient missing her nightcap – goes unappreciated:

‘I decided to play Boy Scout, prescribed whisky (50 ml nightly) on her drug chart and gave the house officer £20 to get a bottle from the supermarket to pass on to the nursing staff, so they can fulfil the prescription on their drug round. This morning, the ward sister reports that the patient declined her drink because, and I quote: “Jack Daniel’s is fucking cat piss.”

5. In which a nurse has just about had enough:

‘There’s a big news story breaking, but so far only gossip-merchants TMZ have reported it. “Oh Christ”, I gasp. “Michael Jackson’s dead!” One of the nurses sighs and stands up. “Which cubicle?”

6. In which the junior doctors must opt out of the European Working Time Directive:

‘Non-compliant doesn’t quite seem to cover it. My contract has taken the directive, dragged it screaming from its bed in the dead of night and waterboarded it.’

7. In which a drug addict falls onto a railing at a very, very bad angle:

‘She’d had the presence of mind to get off her face on cocaine earlier in the evening, which anaesthetized her sufficiently until the Fire Brigade arrived on the scene and were able to cut off the railing just below vagina level (while presumably saying “holy shit” quite a lot)’

8. In which a dementia assessment takes a surprisingly astute turn:

‘With Gordon Brown barely having unpacked his bags, it seems unfair to knock a point off a patient’s Mental Test score for not knowing the name of the current Prime Minister. Although I feel like giving half a mark to the seventy-six-year-old lady who answered “You know, that Scottish wanker.”’

9. In which a medical student displays a slightly worrying absence of common sense:

‘On further questioning, I learned he was boasting to his girlfriend last night about the strength of his erections and announced to her that its throbbing robustness could stop the rotary blades of a desk fan. His hypothesis was monumentally incorrect and the desk fan proved the clear winner. I suggested he attend A&E … And maybe go to a different hospital’s A&E actually unless he fancied being known to his colleagues for the rest of his time here as Cock au Fan. Or Dick Fan Dyke. Or Knob-in-Fan Persie.

10. In which Disney references appear in a medical memoir:

‘A poignant ventouse delivery – it’s a mum I saw in infertility clinic at the start of this job. I feel like holding the baby aloft like Simba and blasting out my best “Circle of Life”’.

This Is Going to Hurt

Have you read This Is Going to Hurt or any other memoirs recently? Let me know in the comments – I would love to hear from you!

6 thoughts on “This Is Going to Hurt by Adam Kay: Top 10 Funniest Moments”