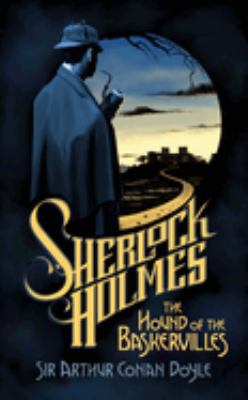 Synopsis: Sir Charles Baskerville confesses to a close friend that he feels haunted by his family history. According to legend, his cruel ancestor Hugo Baskerville received recompense in the form of a hell-hound set loose on the moors to hunt him down.

A few days later, Sir Charles Baskerville is found dead in his garden at the edge of the moor. There is only one detective who can separate fact from folklore in this case: his name is Sherlock Holmes.

I am taking a Crime Fiction module for my English Literature degree this year (which is very exciting!) and this book was on my required reading list. Having said that, Arthur Conan Doyle has created a real cultural legacy and I have always wanted to discover the source of the infamous Sherlock Holmes!

The full significance of Conan Doyle’s crime-busting creation became apparent as I read. It was fascinating to trace elements that remain core tropes in detective fiction to this day…

I usually expect university reading to be a bit of a slog, but The Hound of the Baskervilles was fast-paced and genuinely unpredictable. I needed to annotate throughout, yet the gripping plot still kept its hold on me despite the extra academic distance!

“There is nothing more stimulating than a case where everything goes against you.”

My overall impression after turning the last page was one of satisfaction and closure. Good and evil are clearly defined, all the loose ends tie-up neatly, every one walks off into the sunset (well, not quite…) It is not intended to provoke much contemplation between turning the last page and picking up the next instalment in the series.

When a novel was first published in 1902, we have learnt the hard way to expect limited diversity. While the main characters of Sherlock Holmes and Dr Watson are given more complex character development, there are barely any women in the story at all.

Those that are present fail to make a positive contribution to the case. They’re easily manipulated and just a bit… well, pathetic. This made it difficult to identify with any of the characters: The Hound of The Baskervilles is definitely a plot-centric story.

Conan Doyle is playful with the divide between fact and fiction. His novel is presented through a variety of documents such as diary entries and letters to create an impression of authenticity. With this immersive structure, it is impossible not to start drawing real-life parallels.

Why does a detective character over a century old still maintain such cultural significance? The element of idealism in these stories makes for perfect escapism. The divide between good and evil is unambiguous and we are comfortably certain that the former will triumph in the end. If only reality were that simple.

“The devil’s agents may be of flesh and blood, may they not?”

I was also intrigued by the ethical dilemmas presented, as pursuing the killer inevitably puts other innocent people at risk. Sherlock Holmes is, of course, rather gung-ho about all this, but it made me consider how such moral judgements are made in real-life crime-fighting.

“The world is full of obvious things which nobody by any chance ever observes.”

Read if: You want to discover the origins of the infamous detective in a suspenseful crime fiction classic.

The Hound of the Baskervilles

If you enjoyed The Hound of the Baskervilles, you may also like The Picture of Dorian Gray by Oscar Wilde.

Have you read The Hound of the Baskervilles or any other Sherlock Holmes stories? Do you think crime fiction can influence how society tackles crime in real life? Let me know in the comments – I would love to hear from you!