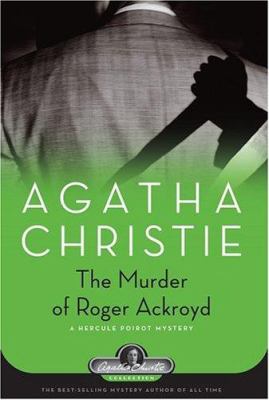 Synopsis: Shortly after confessing to a close friend that she is being blackmailed, Mrs Ferrars is found dead: the police conclude it was suicide. The case takes a much darker turn when that same friend is found murdered in his own study.

An unassuming newcomer to the village seems the last person the police will call upon for help. He spends his days fondly tending a vegetable patch. However, this newcomer is not your average hobbyist gardener, but a retired detective going by the name of Hercule Poirot…

I immediately became immersed in the claustrophobic atmosphere of the small village, in which the entire story takes place. Its inhabitants form a cast of characters that left me bewildered at first, but they all have clear-cut personalities that soon make it easy to differentiate them.

Agatha Christie wastes no time in hooking readers into the action. The crime occurs within the first couple of chapters and I soon felt that the author was playfully teasing me with clues…

Hands-down, the most stand-out element of the novel for me was that plot twist!!! It was the biggest and most ‘well-I-did-not-see-that-coming’ turn of events I think I’ve ever read. Throughout the story, it is fun to guess whodunnit but I was hopeless and fell for every single red herring!

No wonder Agatha Christie is so enduringly popular. I, an early-twenties student, enjoy her books and so does my great-auntie who’s 90. I’ll definitely be recommending this one to her with excitement (if she hasn’t beaten me to it, that is!)

It’s wonderful to read a female crime writer, something which was often viewed as transgressive. This challenging of the status quo is reflected in her female characters, many of whom refuse to remain at the economic mercy of men. In particular, I liked the progression of Caroline as a character. At first, she is dismissed as a gossiper, but she eventually becomes invaluable to the investigation.

There is some mild xenophobia – Poirot is treated with some suspicion as a ‘foreigner’ – but, as he is ultimately the heroic detective, this does not seem to reflect the author’s views.

The detective Poirot occupies an ambiguous position in the story. He is a figure of fear as well as hope:

“Everyone concerned…has something to hide”

I thought this concern with secrets and privacy has lots of modern parallels, particularly as policing and crime prevention make technological leaps. It seems the question of privacy and how far we must surrender this for safety is not new!

“Fortunately words, ingeniously used, will serve to mask the ugliness of naked facts.”

Read if: You want to read a thrilling ‘whodunnit’ that boasts the mother of all plot twists!

The Murder of Roger Ackroyd

If you enjoyed The Murder of Roger Ackroyd, you may also like The Hound of the Baskervilles (Sherlock Holmes #5) by Arthur Conan Doyle.

Have you read The Murder of Roger Ackroyd or any other crime fiction classics? Do you have a favourite Agatha Christie novel? Let me know in the comments – I would love to hear from you!

17 thoughts on “The Murder of Roger Ackroyd by Agatha Christie: The Mother of All Plot Twists!”